The photos below are from Dave Darling’s induction into the Wesleyan Baseball Hall of Fame, and submitted by David Eklund, who writes, “Please note the very special wall sign ‘running between the ears of Tom Young and Dave D.’ ” 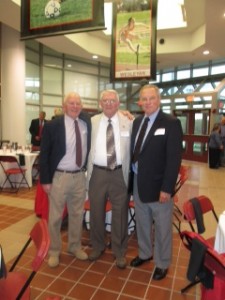 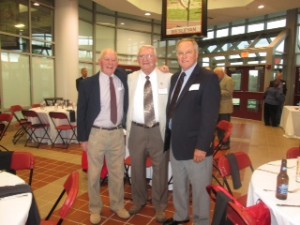 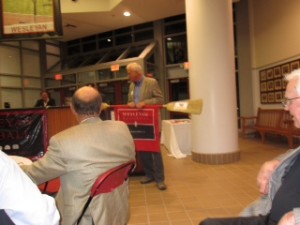 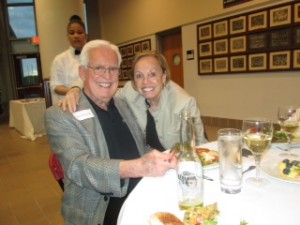 The 55th Reunion of the Great Class of 1959 was an unbridled success. We had a good crowd returning, tremendous fun catching up and wandering around a campus that continues to change, capped by a lovely Class dinner. It was a great pleasure to have Nancy DiMauro with us for the weekend. Dave Eklund held forth in great style. (I have pictures!!). Dick Cadigan was our M.C. for the evening, and ran things with great enthusiasm and his usual panache. Doug Bennet and Midge were able to attend, which made the evening even more special. At cocktails beforehand, my wife Cyndy met Mike Whalen ’83. Her first comment was “What a big fellow you are!”

Cads has gone off to Uganda for three weeks for some well earned R&R after his great Reunion performance. He is on a mission with the Kellerman Foundation to work with the Batwa peoples, and then on to the Greek Islands in September! His last comments before departure were: “Great 55th! We can still laugh, sing, toast with and to each other. Great fun!!”

Larry Brick reports: “No need to invent a story about me. I am a first-class felon happily trapped with my wonderful deaf wife of 50 years. We ski bum for two months every year in the Rockies, scuba dive in the Caribbean, enjoy our extended family of three sons, six grandchildren, and close relatives. We live in a Continuing Care Community in Philadelphia. No housework, yard work, repair work, no work period. Deaf Community activist, career educator and administrator, living with the annoying and occasional aches and pains that are part of aging and which are much better than the alternative!”

Walter Burnett has just returned from a three-week trip of day hiking at the Mount Rainier, Olympic, and Pacific Rim national parks. Planning a trip to Indonesia this winter and Hawaii next fall. Walter is not slowing down at all, having just retired from the faculty at Emory University on July 1. He is still living in Western North Carolina, but spends time in Atlanta as well.

Marsha and Bob Gillette’s comments on our Reunion: “We glowed with warm recollections of the Reunion on our long ride back to Lynchburg. There is something special about our fellowship, which we seem to take for granted, but others notice. The genuine excitement of seeing each other and being together was palpable. We are so lucky to have been there to celebrate our 55th. Somehow we just cannot wait for another five years to pass. Having Al Haas ’56 with us for dinner was very special. He was my ‘big brother’ at Eclectic, and during those freshman days of self-doubt, he supported me. It took a bit longer for us public school folks to adjust to the demands of Wesleyan. I look forward to reading Dave Potts’ ’60 new volume on our years at Wesleyan and their historical context.”

Owen Tabor and Margaret summered on the Isle of Skye, to escape the Memphis heat. They had a cottage on a singlet-rack road by the sea. Lots of beauty, quiet, sheep, and a great pub not too far away in operation since 1790. All in all, a perfect setting. I asked O. if he had brought along his bagpipes and kilt. “The pipes have been on the shelf for a while, and the wee kilt is in the closet, as I have become less wee…but the rest is good, man!”

Phil Pessoni was included in the publication, Legendary Locals of Middletown. I guess the authors felt that his close 20-year relationship with Jackie Kennedy and Caroline was important enough to qualify for that honor. Phil’s grandfather, Patrick Michael Kidney (1877–1967), was also in the book. He held many town positions over 40 years and had a great influence over the lives of many Middletown residents. Congratulations, Phil.

Joan and Ted Bromage got back to Mt. Desert, Maine, and wrote: “It was a great Reunion and good to see so many survivors! Joan and I enjoyed ourselves, felt heartened by the return of singing, and intrigued by the ‘aggie’ program at Long Lane. Had some time to do some historical research and I think we located my old study hall, the Goodyear Tap!”

It is with great sadness that we report the passing of John Briscoe. Our classmate Marty Weil wrote his obituary in the Washington Post. “Congressional Aide, Nonprofit Director” was the subtitle, but John said it best about himself in our 50th Reunion Book: “Briscoe has served as a practical idealist, an entrepreneur, a problem solver and an unreconstructed early 1960s optimist.” His wife Kate, his children and all his Eclectic brothers will sorely miss John, Peace Corps volunteer, Congressional aide, development director of several nonprofits, Lakeville farmer, husband, father, great pal of many. John Alexander Holway Briscoe was quite a man!

We are also greatly saddened to report the death of Robert Jensen. Robert came back for our 50th, at which time he was still running his successful jewelry store, which he told us was the largest in the U.S. in terms of display area. Our sympathies to his daughter and family.

Dana and Dave Clemens have been covering a lot of ground lately, and in sensible places, given the winter in the Northeast. Three weeks in Hawaii in January, most of March in Florida sounds pretty clever. A trip to Thunder Bay in July for a family reunion rounds out the 2014 plans, but there was not a way to squeeze Middletown into the mix, sadly.

Carol and Shive Shively have just returned to their home in California after a wonderful family reunion in Cabo San Lucas, Mexico, with three of their children and assorted others. Carol writes: “Shive continues to meet the challenges of Parkinson’s and is doing quite well. He has started playing the trumpet again, and is busily teaching the gal who is looking after him to play, too—a great sign. More travel to the East was not going to be possible this year.”

Fred Stone wrote: “It was a great honor to be inducted into the inaugural Wesleyan Baseball Wall of Fame on May 3. My teammates Dave Darling and Tom Young attended the event in the Usdan Center, which gave the Class of ’59 good representation. I was grateful for their support. Tom and Dave drove to Maine last summer to check out my progress since my stroke in 2010. I walk with the assistance of a walker, but otherwise I am in good spirits and take life one day at a time. The Wesleyan facilities were very impressive, and the Wall of Fame program was a class act.”

Charlie Wrubel’s son Bill ’85 won an Emmy for his role in co-directing Modern Family which, itself, won the Emmy for best comedy series. Bill has won five Emmys and now moves on to Warner Bros., where he has a contract to produce his own material. Wow!

Since our last class notes came out, we are sad to report the passing of Bob Berls. We chatted about his coming back, and he said at the time that he was too frail to try it… Our thoughts are with Bob’s wife and family.

Note to all classmates who took pictures at the Reunion: Please e-mail them to Cynthia Rockwell (crockwell@wesleyan.edu) and she will make sure that they are posted on our Class Notes website. I have already sent mine in, and hope others will follow! This is the url for the site: classnotes.blogs.wesleyan.edu/class-of-1959/. We found Wesconnect difficult to access. Hopefully, this experience will be different!!

Intern at the Wesleyan Office of Communications for Spring and Summer 2015. Currently working towards meeting the requirements for an Economics and Government dual major. A Wesleyan Posse Veteran.