Karla Bell writes, “I’m still friends with my roommate, Nancy Fuchs Kreimer, Rabbi Nancy now. She has spent much of life teaching and acting in other roles at the Reconstructionist Rabbinical Seminary. The Cleveland Jewish community keeps inviting Nancy to give presentations and she stays with me and we get a chance to catch up. Most recently she was asked to facilitate and lead an interaction between the members of a conservative synagogue and Muslims who are active in the Islamic Center on the East Side of Cleveland. She was pleased that participants shared passionate and touching stories. She got rave reviews. We also discovered that we wear the same shoe size. (She came with tennis shoes; I lent her boots, as we had 4-6 inches of snow.) Juliette Kendrick, another roommate, and I are very close, a relationship re-sparked by my sending two children to Emory in Atlanta, and Juliette sending her two sons to college, and one to medical school, in Ohio. During an extended visit she stayed at my house, yes, we discovered she could wear my clothes. (I’m the conglomeration of our bodies?) The picture was taken a couple of years back, when we had a reunion in Cleveland. 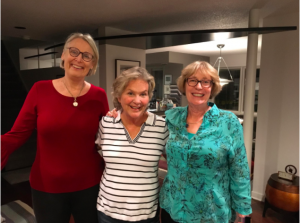 “I once had a rose named after me and I was very flattered. But I was not pleased to read the description in the catalogue: no good in a bed, but fine up against a wall.”–Eleanor Roosevelt

Bill Burton retired after a 37-year career with the U.S. Geological Survey in Reston, VA.  He will continue on as Emeritus, finishing projects that were not completed due to the pandemic.  One is geologic mapping of an area in western Connecticut, where he is cooperating with Bob Wintsch, Adjunct Professor with Wesleyan’s Department of Earth and Environmental Science.  Bill and his wife Laurel will be spending a lot more time at their cabin in Jamestown, Colorado, and Bill will continue his volunteer activities including astronomy education, supporting the northern Virginia Audubon Society chapter, and tending beehives at his church.  He looks forward to future Wes reunions at Lloyd Komesar’s film festival in Middlebury, Vermont.

Joan Braun reports:  “Last September, I embarked on  Phase I of my glidepath to retirement, trading a full time job as COO of the United  Way Bay Area for a part-time job as the Finance Director of Homebase, the Center for Common Concerns. It’s been a salutary change—three and half days of work instead of six.

Lest I worry about what to do with my newfound leisure, I stepped  into role of President of  the Aurora Theatre, a hidden gem located  in the heart of Berkeley. My timing was impeccable.

The stage went dark in March in response to Governor Newsom’s shelter-in-place  directive and we’re expecting to be dark until next summer.  Our tiny 150-seat trust stage venue  is absolutely unsuitable for socially distanced seating.  Given that unhappy fact, It’s been all financials, all the time.

We were lucky enough to get a Paycheck Protection Program  loan and a small grant from the City of Berkeley at the start of the pandemic. In  July, we held a very successful on-line Gala. In short order, we launched both a Friday afternoon digital salon and a full-fledged on-line  membership program. In October, we’ll  be mounting an  online, audio performance of a brand new work, The Flats. Get your tickets now:  https://www.auroratheatre.org/the-flats-memberships! Geography is no excuse to miss it.”

Chris Nagle updates us: “I left Wes Tech in the fall of 1974 and headed right off to law school with a vague goal of being a small town attorney in northern New England, probably Vermont where I had spent winter breaks as a ski bum in Stowe.  In the fall of 1977, I found myself working for a large law firm in Portland, Maine.   For the next 43 years, I commuted from the northern suburbs to two different law firms located downtown.   Portland rose from the ashes like a phoenix to become a hot small city nationally recognized for its restaurants and its arts scene.   At different times, I enjoyed high office window views of the Fore River and Casco Bay or the White Mountains and Tuckerman’s Ravine.

On August 1, 2020, I finally achieved my goal.   I now work at the Law Offices of Thaddeus Day PLLC, a two attorney operation in “downtown” North Yarmouth, Maine, which also has a breakfast and lunch restaurant, a gas station/convenience store, a day care center and Town Hall. My commute from my home in semi-rural West Cumberland is 3.5 miles mostly on a secondary highway (Route 115) with three right turns, two stop signs, no traffic, no traffic lights, no parking garages, no key cards and no elevators. The firm is in a small converted cape, my modest office window looks out into the back yard, and my faithful dog Ace comes with me most days.    I only work from late morning to late afternoon most days. Professional life the way it should be

I still walk 18 holes of golf at least weekly when there is no snow and am still challenged by the ski slopes of Sugarloaf and Stowe each when there is snow, both with friends and family.

I continue to be amazed by my sons. Scott (BA Bennington ’05, MS Teaching Pace ’07, MS Computer Science NYU ’17) is helping develop quantum computers for IBM, in additional to being longtime Occupy member, EMT, WFR etc. He is happily married to Keilly Cutler (Hamilton ’12?) and they live in Austin, TX. Jeff (UVM ’10) lives in Morrisville just north of Stowe, VT, is the marketing director of Ski Essentials, a large internet ski company, and posts regular “Chair Lift” videos about new developments in skis. He recently joined a local golf club which makes my heart flutter.  His life partner Tori (UVM 08?) works for ACLU Vermont.”

Carolyn White shares, “I just attended the online version of Lloyd Komesar’s MNFF: Middlebury New Filmmakers Festival, 6th édition. 127 different items to watch over an 8 day period. I managed to see 27: narratives, documentaries and shorts. As always, the quality was high. I learned a lot and feel enriched. 10 days afterward, Steve Goldschmidt (1972) organized a Zoom for the Wesleyan folk who attended to discuss and critique. We could not say enough good things about Lloyd, the organization, the quality of the films. Mark your calendar, reserve your room for the weekend before Labor Day weekend. Lloyd will guarantee you his ever warm welcome. “

Monique Witt updates us: “In spite of everything, Ben dropped his third album (“Kites and Strings,” the Nebula Project) recently, and is live streaming and finishing some commissioned compositions.  Dev’s venture, Ex Machina Soundworks, launched a new audio platform, and Steve is working the same crazy hours but remotely.  The production company will release only four albums this year, but the slow down has allowed more time for reading and writing.  Everyone is well.”