It was a great pleasure for all of us who attended our 40th (!) Reunion in May. While we broke the 40th Reunion attendance record, many were missed. Hope to see more in 2024.

Kimberly Carrell-Smith writes in: “I’m gradually moving into retirement, leaving my job as a history professor last spring. I’d been half-time in the Lehigh University history department for 23 years, so leaving that was bittersweet. I’m continuing with my other half-time job, running the interdisciplinary graduate program I’ve directed at Lehigh for the last 12 years. So still placing and overseeing community fellows in one year experiences with local nonprofits and local government, as well as teaching their core courses all year. Also looking forward to the birth of our first grandchild who will live only a mile away from us. I suspect that’ll be my new half-time job . . . Still in touch with my first year roommate, Lisa Giancola (was it really 44 years ago this fall that we arrived at Foss 5?), Kate Meal Goetz, Kathy Herron and her husband, Peter Scherer, Frances Sheehan, Ellen Blau, and occasionally Jane Cooper ’80. Wondering where all the other A-2 roommates and friends are these days.”

Matt Okun chimed in: “It was a wonderful 40th Reunion and we all had a great time. Certainly, the highlight of the weekend was the party at Eclectic. I had a chance to spend some time with my nephew, Alex Okun ’20, and his roommates. Just came back from Portland, Ore., where I saw Tom Valtin and his wife, Ellen, who were taking their son, Jamie, to Lewis and Clark. Expecting Jim Cummings to visit in the coming weeks. I am sending out greetings and love to all of our classmates, especially the folks in greater New York, some of whom were not able to make Reunion. I won’t forgive anyone who visits Seattle without letting me know.”

Clifford J. Hendel reports from Spain, where he has lived for more than 20 years (and which he first got to know on a Wesleyan semester abroad), that last year he left his Madrid law firm to set up a solo shop as arbitrator. Practicing under the name of HENDEL IDR, he sits in international commercial, construction, and sports disputes.

Freed from some of the constraints of collective practice, he has been dedicating substantial time to academic, pro bono, and similar matters. He coaches a Spanish university’s team in the Vis international commercial arbitration moot, is a founding patron of Pro Bono España (a platform for the dissemination, promotion and execution of pro bono work in Spain.) Next year, he will be publishing a short work analyzing the synergistic relationship between Alexander Hamilton – who has recently been restored to his rightful place in history by a musical created and composed by a Wes alumnus – and George Washington. Clifford has been enjoying watching his family grow, reporting that while he’s not sure if he likes being a grandfather, he loves having a grandson.

Ben Solnit shares that “on Aug. 10 our daughter, Rebecca, married her college sweetheart, Ben Rosenfeld, at a ceremony held at our house in Morris, Conn. Rabbi Ari Rosenberg of Temple Sholom officiated. Among the wedding guests were John Hatleberg, and his wife, Rise. Rebecca was recently promoted to the position of program manager of Teacher Pathways for the Philadelphia School District and Ben is applying for a cardiology fellowship as his residency in internal medicine draws to a close. Our other daughter, Anita, has completed her first year as an LMSW for Mt. Sinai Hospital’s Family Clinic in New York City. Audrey and I continue to enjoy our volunteer work in literacy, legal services, library groups, and nonprofits.”

Doug Pavlak reports great “news from Falmouth, Maine—the successful launch of my son, Gunter ’23, to Wesleyan! The entry process was pretty amazing. The football team was waiting with golf carts at a staging area on Lawn Avenue at Butterfield. They had everyone unloaded within less than five minutes; and all of my son’s belongings were waiting in the room when we got to it. Other small colleges take note!”

Doug Pavlak reports great “news from Falmouth, Maine— the successful launch of my son, Gunter ’23, at Wesleyan! I have to say that the entry process was pretty amazing. The football team was waiting with golf carts at a staging area on Lawn Ave. at Butterfield. They had everyone downloaded and off to a more permanent parking space within less than five minutes; and all of my son’s belongings were waiting in the room when we got to it. Other small colleges take note!”

Jono Cobb contributes that “my wife, Suzzanne, and I spent a couple of August days in beautiful Lenox, Mass. We were there to visit our daughter, Jordan, who was performing the ingenue role in The Merry Wives of Windsor at Shakespeare & Company. Harold and Vivian Brown drove from their home in western Connecticut to join us for the performance and dinner afterwards. Fortunately, in part because of the many reunions she’s attended, Suzzanne knows many of the players about whom we shared old stories and more recent news. Our bragging about Jordan included mentioning her podcasts, in which she writes, produces, and performs some of the voices, most notably Janus Descending, which has recently surpassed 100K downloads.” 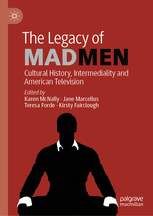 Jane Marcellus is co-editor (with three colleagues in the U.K.) of The Legacy of Mad Men: Cultural History, Intermediality, and American Television.