Those with class notes, please write to your class secretary.

Carole Flynn MALS ’08 passed away on September 9, 2021. A full obituary can be found here.

Life goes on, even in a pandemic!

Ulyana Sorokopoud Cubeta writes: “My spouse, Jezz Cubeta ’10, and I bought our first house. We moved our gaggle of three kids and three cats to Maryland to be closer to my job as a postdoctoral fellow at the National Institute of Standards and Technology.”

Cecil Apostol and Jung-Hee Oh ’07 decided to end 2020 on a high note by getting married (virtually) on New Year’s Eve in their apartment in Brooklyn. The two barely knew each other at Wes and instead first bonded at a NYE party that Jung-Hee hosted at her Brooklyn apartment in 2007. Joining them on this Zoom wedding were Wes alums from each of these class years: 2005, 2006, 2007, 2008, 2009, and 2010. Promiti Islam, Sarah Fajardo ’07, Kate Reil ’07, Jessica Tsai ’07, Thomas Tachibana, and Nicole Hsiang ’05 each gave incredibly heartwarming toasts. Theodora Fan designed a beautiful three-tiered wedding cake. After the ceremony, all the Wesleyan folks split off into three different breakout rooms that were appropriately named: Tent Party, Party on Fountain, and Mabuhay Afterparty.

Marianna Foos writes in, “Whereas before the pandemic, we would exchange actual house plants and I would help identify dead birds she found at work, Xue (Sun) Davis and I have been exchanging frequent texts about which plants to buy and which live birds she is seeing at her feeders. For Christmas she got me the perfect philodendron and I got her a roasting pan so that sort of ruins the parallel. Unless she uses it for poultry, I guess.”

Janie Stolar would like to inform all eligible alumni who like cats and live in the Los Angeles area that she is somehow single. Katie Fabac reports, “I’ve been home.”

Brittany Lyth (Marshall) got married in full COVID fashion in September. She writes, “My husband, Dave Lyth, and I got married on the beach where he proposed. Our close friends were identified as close contacts so we had to adjust our plan of hosting a small 30-person wedding to just having our parents, officiant and photographer present. It was perfect and better than we expected. We are currently living in Waltham, Massachusetts with our new rescue puppy Wesley who coincidentally was born the day we got married!”

Class of ’08—write to us and let us know how you’re doing!

Lynn Favin was accepted into eight different acting MFA programs all over America and the UK (including two full scholarships and stipend offers). She is currently in England, completing her MFA in professional acting with the Bristol Old Vic in England. She has renewed her contract with William Morris Endeavor and recently played Queen Margaret in Henry VI Part II on YouTube’s Shakespeare live stream The Show Must Go Online. For more acting credits and upcoming projects, visit lynnfavin.com.

Lyz Nardo writes, “Greetings from Long Island City…for now! We welcomed our second daughter, Sofia, as the COVID-19 pandemic hit New York. After social distancing for eight weeks in New York with my husband, my mother, a 1-year-old, a newborn, a cat, and a half-dozen Alexa devices, we are starting to pack up and countdown to our move to Livingston, N.J. Sadly, I will be far less likely to run into any Wes alumni on the streets of Livingston, but look forward to visits once social distancing relaxes a bit!”

Emily Palmer started a new job as a clinical director of palliative care at Hebrew SeniorLife in Boston last month and is fully deployed on COVID response. She postponed a planned summer wedding to 2021, but will still be getting legally married to her love, Daniel Schultz, in a tiny backyard wedding in July. She enjoys growing food in her community garden in Jamaica Plain and sending love and strength to the whole WesFam.

Benjamin Rowland writes, “In January I joined a startup, Hio, as head of partnerships. We provide virtual event solutions to small meetups and large conferences. Since COVID, all event organizers are transitioning to virtual, so it’s been fascinating to watch this new digital world evolve so fast.”

Since graduating from Wesleyan, Kyra Beckmann has been living in Los Angeles, amassing marketing expertise and enjoying the sunshine. She joined Sephora a year ago as the director of content production and is active in the evolving content landscape.

Lyz Nardo Levy writes, “We are counting down in the Levy household—we will welcome baby girl #2 in early March. My daughter Mila (13 months) will be promoted to the role of Big Sister and my husband, who always dreamed of being surrounded by women, will get his wish (just maybe not the way he intended).”

Kate Krems graduated from George Washington Law in May, gave birth to her second child, Adela, in June, and somehow managed to pass the Bar in July. She works for Zuckerman Law, a small firm specializing in employment and whistleblower law in the D.C.-metro area and takes time to practice and teach yoga when she can.

Emma Komlos-Hrobsky writes, “2019 was a year of wild and weird pleasures in writing for me. In June, with support from the Elizabeth George Foundation, I made a trip to CERN, the international particle research center outside Geneva, to research a novel. It was nothing short of life-changing to see such wonders as the Compact Muon Solenoid that detected the Higgs boson and to interview women particle physicists about their work. In September, The Colony—a performance piece about sisterhood and the eusocial behavior of army ants—premiered at UConn; it was a treat to co-write it with my friend Anna Lindemann and to imagine what an ant aria might sound like. Otherwise, I am living in New York City with my longtime boyfriend Matt and hoping for more particle physics and bugs in 2020.”

Amanda Sim is happy to announce the launch of a new design studio, Working Hard. Working Hard is a design consultancy that creates visual experiences and design solutions with a special focus on taking on projects for social good. In tandem, Working Hard has also created a line of desk organization products—the first product set just went live in January. Check it out at work-work-work.com.

Maya Bass ’08, MA’10 is a family physician and was featured in The Guardian for her work providing abortions in Oklahoma. She works full-time as family medicine faculty at Drexel University College of Medicine in Philadelphia in addition to flying back to Oklahoma part-time to provide reproductive health services.

Jeremy Brown and Kara Schnoes ’07 completed their family this past year with a second child who was adopted in Florida. They are enjoying living in Eugene, Ore., and hope the Wes community here continues to grow.

Steve Maroti writes, “I am finishing a master’s in international affairs at Columbia University, focusing on international security policy and finance, and recently got engaged. I remain eternally game to meet at Miller’s.”

Sam Barcelo graduated in May with an MBA from the Questrom School of Business.

Please keep the updates coming! Your classmates love hearing about you. E-mail me anytime.

Ruby Corbyn-Ross writes, “I’m working full-time teaching English reading remediation at a Spanish-immersion public charter school and part-time as a musician in New Orleans. Annalisa Kelly and I are making lots of Balkan music together! Our choir, Trendafilka, just released our first studio album and our band, Blato Zlato, is going on tour this summer to the West Coast and Bulgaria in advance of our sophomore album to be released in the fall. We’re working with a class of ’12 alumna to make a music video! I see a number of Wes folks regularly in NOLA and look forward to seeing more this summer at a wedding in Massachusetts.”

After a grueling year of applications, auditions, and acceptances into eight different MFA programs around the world, Lynn Favin will be attending Bristol Old Vic in England! She is one of 14 international actors selected to train at the same school as Olivia Coleman, Patrick Stewart, Daniel Day-Lewis, and more. She also starred in her second film with the AFI this year, playing Jane Everyman in the sci-fi comedy, Deuterstomes. Represented by William Morris Endeavors in the world of VO, Lynn has many cartoon characters releasing later this year and recorded a national commercial for a major laptop brand. lynnfavin.com

Marina Kastan Hays writes, “I’m moving to Denver next month for a job in the textile conservation lab at the Denver Art Museum. I don’t really know anyone there so would be glad to hear from any Wes grads in the area!”

Sam Barcelo graduated from Questrom School of Business with an MBA, concentrating in marketing, entrepreneurship, and social impact.

The Class of 2008 has been taking the world by storm a mere 10 years after graduation! Jeffrey Stein is working as a public defender in D.C. While at Wes, he swam and, until this year, held two school records in the 200- and 400-freestyle relays. He has since replaced swimming with distance running. In November, he won the Marine Corps Marathon and was featured in NBC News and the Washington Post!

Kat Cho is publishing her first young adult novel, Wicked Fox, this year with Penguin Random House. It is based on her Korean heritage and draws from the myth of the gumiho, a nine-tailed fox who can become a woman to lure in men and eat their livers in order to live forever.

Bex Allen writes, “After 10 years in sweet home Chicago, I picked up and moved to Seattle, where I now work in corporate and foundation relations for UW Medicine.”

Sam and Sage Ruth decided to throw away their carefree DINK [double income, no kids] life, and welcomed their son Maxwell “Max” Alexander in November. Learning the fight song is next on his list of major developmental milestones.

Elissa Kozlov writes, “I accepted a faculty position at Rutgers University (jointly appointed to the School of Public Health and the Institute for Health, Health Policy and Aging Research). My family and I are planning to move to northern New Jersey in May. Any Wesleyan folk living in the Jersey ’burbs?” 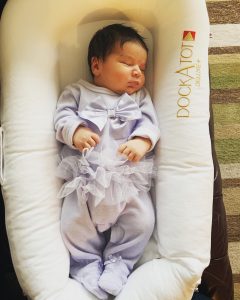 Lyz Nardo Levy’s daughter, Mila, arrived on Dec. 5, weighing in at a whopping eight pounds, 12 ounces! Lyz and her husband, Dor, are very tired, but over the moon! Lyz writes, “She really is a laid-back baby. Tipsy Scoop continues to grow and we plan to open our second liquor-infused ice cream ‘barlour’ in Brooklyn this spring!”

Summer was full of weddings and babies for ’08!

Emily Einhorn and Jeff Wong had a baby this summer, Justin Edward Einhorn-Wong, born on June 11.

Silverio J. Vasquez and Jennifer Veloz ’10 got married this summer as well. Silverio writes, “If not for Wes, we would’ve never met!”

Rachel Bedick wasn’t able to make it to the Rreunion “because I gave birth to my son Tobias on May 6. In addition to being a mom, I started a new job as a clinical social worker embedded in a pediatrician’s office in Beverly, Mass., where I provide therapy to young people.”

Nathan Strand and his wife relocated to Colombia, where he will be working at the U.S. Agency for International Development Mission in Bogota for the next two years. They are already enjoying the great food, mild climate, warm local culture, and abundant adventures that Colombia has to offer.

Lynn Favin has had an incredibly busy year in Los Angeles. She signed with William Morris Endeavors for voice acting and recorded another set of characters for the Emmy award-winning animated show Robot Chicken. After performing with the Shakespeare Center of Los Angeles in Macbeth, she joined the Actor’s Equity Association and was invited to be the inaugural equity guest artist for LMU’s new outdoor company Shakespeare on the Bluff, starring as Desdemona in Othello and Titania in A Midsummer Night’s Dream. She will be performing with them in Pericles next summer.