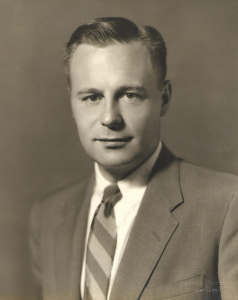 Dr. Schnell grew up in Mt. Vernon, N.Y., and Candlewood Isle, Conn. He was an accomplished sailor and athlete. He was president of his senior class at A.B. Davis High School, Mt. Vernon, N.Y. He received his BA degree from Wesleyan University and was a member of the Alpha Delta Phi Fraternity. His subject concentration was chemistry and Latin.  He graduated from Cornell Medical University in 1947.  He completed his residency at The Brooklyn Hospital in 1947-1951.

During the Korean War he served honorably as a Captain in the U.S. Navy and the U.S. Air Force. During this time, he and his wife, Catherine, were recruited by the Central Intelligence Agency to serve overseas as physicians on the island of Saipan.

In 1956, he moved to Garden City and practiced obstetrics/gynecology at Nassau Hospital, now Winthrop Hospital, in Mineola, N.Y. He was a member of the American Board of Obstetrics and Gynecology. As a Garden City resident Dr. Schnell was actively involved in Garden City baseball, the Garden City High School Men’s Association, the Garden City Retired Men’s Club, and the Cherry Valley Club.  He was an avid supporter of Garden City High School sports and could be seen at almost every home and away baseball, basketball and football game. He enjoyed bridge, gardening, golf, tennis, reading, swimming at the beach, classic cars and boats, and attending the theatre. He was a long time Yankees and Jets fan.

He was the beloved husband of the late Catherine Lund Schnell and the late Marge Rix Schnell.

Military burial will be at Calverton National Cemetery at a future date.

We thank Dr. Schnell’s daughter for this heartfelt obituary.

Leonard S. Halpert, a retired attorney and executive who endowed the Hugo L. Black Lecture on Freedom of Expression at Wesleyan, died Oct. 5, 2017. He was 94. A member of the John Wesley Club, he left the university after his junior year to join the U.S. Army Air Forces and then received his degree in physics with honors in 1946. In 1948 he received a law degree from Columbia University. From 1957 to 1988 he worked for the Cocoline Chocolate Company, becoming the company’s president in 1961. After the company conveyed its right to use the name to the Dan Bell Chocolate Company, he continued as president and CEO. In 1982, he was named the company’s vice chairman, a position he held until his retirement in 1988. During the 1960s he became actively involved with the French winery Domaine Gerin and started a wine importing business, which he sold in 2006. An active alumnus, he endowed the Hugo L. Black Lecture on Freedom of Expression. Offered annually, it brings to the Wesleyan campus distinguished public figures and scholars with experience and expertise in matters related to the First Amendment and freedom of expression. He was also an active member of several neighborhood organizations in the downtown Boston area. Survivors include his wife, Selma Rutenberg, M.D., and his daughter, Margaret Dara Halpert.

Adolf Grünbaum’s writings deal with the philosophy of physics, the theory of scientific rationality, the philosophy of psychiatry, and the critique of theism. In a 2012 book, Why Does the World Exist?, the New York Times journalist Jim Holt described Grünbaum as “arguably the greatest living philosopher of science.” And Holt declared (p. 63): “…in the philosophical world, Adolf Grünbaum is a man of immense stature.”

In 2013, Oxford University Press in New York City began publishing three volumes of his collected papers and lectures under the overall title Adolf Grünbaum: Collected Works. The first volume is devoted to his writings on scientific rationality, the human condition, and 20th century cosmologies. The second volume contains papers on philosophy of physics, time, and space. The third volume features lectures on psychology and psychoanalysis, including Grünbaum’s previously unpublished 1985 Gifford Lectures, and his 1985 Werner Heisenberg Lecture to the Bavarian Academy of Sciences in Munich, Germany.

Please send updates to the editors.

Please send updates to the editors.

LAWRENCE ALEXANDER, who retired as the administrative attorney for the Connecticut Supreme and Appellate courts, died June 5, 2014, at age 91. After serving in the front lines at the Battle of the Bulge during World War II, he received his bachelor’s degree from Wesleyan with honors and then received a law degree from Columbia University. He was a member of Sigma Chi. He and his first wife, Colleen Spielman Alexander, the mother of his four children, moved to the Philadelphia area, where he was an executive in a family business before returning to the law as a Pennsylvania assistant attorney general. He then moved to Connecticut, where he continued his work for political and social causes. After retiring in 1993, he continued to work for private practice attorneys, taught paralegal courses, and served a two-year term as a magistrate in small claims court. Survivors include his wife, Ruth F. Alexander; four children, including David Alexander ’74; two stepchildren; five grandchildren, including Molly B. Alexander ’09 and Jaclyn Alexander ’09; two step-grandchildren; and a nephew, Marc Levin ’73. He was the brother-in-law of the late Alan M. Levin ’46.

See Newsmaker on Adolf Grünbaum and please send updates to the editors.